I met H.T. at LaGuardia High School (who needs our help). He was one of the choreographers we worked with in our senior year. We had such a great time with him! He was always smiling. In a good mood. Working with him was more than just creating a ballet, it was an unique experience. We learned about meditation and stillness. Which can be a hard topic for high school seniors. He would lead the sessions from the front of studio 838, while his dancers moved throught the students giving little corrections. Most of all, I remember H.T. would challenge us. He would give us tasks for our minds and for our bodies. He was also very positive. I looked up to HT. We all did. You could see that he was a good leader and a inspiring man. His wife Dian Dong worked very closely with him. She is also such a great energy! She would remember the parts he did not… it was very cute. He created a piece called “Meditation of a Drunken Peacock”…. and I was the Peacock! My first main role… it was so much fun. I found a picture from the piece, I added to the photo journal. I look crazy…

One day they both took our whole class on a trip to Chinatown! First we visited a traditional Chinese buffet and tried many new foods. Then we visited The Chen Dance Center and saw where he works with his company. It was an experience I didn’t soon forget. As an Asian-American artist, H.T. Chen has been a leading choreographer, performer and arts advocate for three decades. Born in Shanghai, China and raised in Taiwan, Chen has been a resident of New York City since 1971. Mr. Chen is a graduate of the University of Chinese Culture in Taiwan, The Juilliard School in New York City, and New York University’s Department of Dance Professions, where he received his Masters Degree in Dance Education. In New York, he also studied at the Martha Graham School of Contemporary Dance and was a scholarship student at the American Dance Center.

After choreographing and performing for numerous years at the La MaMa Experimental Theatre Club in New York City, Chen turned to presenting his own work, forming H.T. Chen & Dancers in 1978. The company has since appeared in important venues for contemporary dance throughout the United States and has toured in Europe twice and in Asia seven times. As a professional choreographer, Mr. Chen is a positive voice for his community, speaking with power and honesty from a distinct perspective, describing his experiences and influences through his work. This important artistic statement combines a repertoire of dances rooted in Chinese legend and folktales which, when fused with Mr. Chen’s awareness, enlightens audiences both familiar and unfamiliar with Asian culture.

To Mr. Chen, providing cultural arts services to the local community is as important as creating new works. The School, established in 1980 in Chinatown, provides year-round classes in ballet, modern dance, creative movement and piano. In 1988, Mr. Chen established The Theater, Chinatown’s first performing arts venue that presents several modern dance series. newsteps, a semi-annual series, supports new choreography through showcase opportunities and production support; the Ear to the Ground series provides commissions and production support for emerging Asian artists; and Co-presentations allows the Theater and studios to support independent modern dance choreographers looking to produce or rehearse their own work. H.T. Chen’s professional credits include choreographing and performing in Off-Broadway productions, television, and the concert stage. He is also a master teacher and an ambassador for the arts.

Mr. Chen has been the recipient of numerous awards, including three Fellowships from the National Endowment for the Arts in 1984, 1985 and 1987; a New York State CAPS grant; a Jerome Foundation grant in 1981; and a Meet the Composer grant in 1993. In 2002, H.T. Chen & Dancers received the New York State Governor’s Awards for artistic achievement and contributions to communities. In October 2003 the Organization of Chinese Americans honored Mr. Chen with a Lifetime Achievement Award, and in 2004 he received the Special Recognition Award for Community Service from the CUNY Asian Alumni Association. In 2005, Mr. Chen was the recipient of the BESSIES Special Citation, and, in 2009 he received the Mayor’s Award for Arts and Culture. H.T. Chen is the proud recipient of the 2012 Martha Hill Dance Fund’s Mid-Career Award.

In my professional career I visited and even performed at the Chen Dance Center. I often think about my time with H.T. with many happy thoughts. I am honored to have him a s a part of this series. He is one of the many great artists I met through my training at LaGuardia High School. Now that I am a in the professional world I truly realize how great that training was. Thank you H.T. for the great memories and inspiration.

As a child I always liked painting and drawing, so my parents thought I should become an architect. However my mind always drifted to the architecture of movement so I began studying dance at the College of Chinese Culture in Taiwan. In NYC I studied at the American Dance Center (Ailey School), Martha Graham School, The Juilliard School, and received a masters degree in Dance Education from New York University.

I love pasta dishes from all cuisines. My family is originally from Shanghai, so I enjoy many of these dishes too.

I enjoy many forms of dance and theater, but one that stands out is The Green Table by Kurt Jooss.

Competition dance, extreme dance that turns the art into spectacle

Reflect society. I always believed that good art has social value. This can influence new concepts.

I enjoy gardening! I have rare Chinese orchids and huge peonies, as well as bamboo, pine, plum and peach trees.

Marrying my wife Dian Dong who is a beautiful dancer and my creative muse for all these years. We met at Juilliard and have worked together on numerous works, established a black box theater in Chinatown, NY, and a school to serve children from the community. Together we have raised two lovely daughters –who both dance, of course.

I always enjoyed working with the dance majors at LaGuardia HS. The kids are so talented and bring a vitality to each piece. I still remember your performance in the starring role in: Meditations of a Drunken Peacock – very convincing!

While performing in China in 1991 a huge bat came swooping across the stage several times during the opening piece. Somehow the high music pitch awakened it from the rafters and so it decided to make a grand entrance. It rather enjoyed being in the spotlight, and kept zooming about throughout the concert.

The late Ellen Stewart, Founder/Director of La MaMa Experimental Theatre Club welcomed international artists and provided opportunities for them to collaborate. My company was based at La MaMa when we first began and Ellen was a founding member of our board. At La Mama I participated in workshops with Andrei Serban, Peter Brook and other amazing artists.

How to challenge oneself is hard – it takes guts to work in a different way or use a different approach.

I’m still looking for a quiet, rural place where I can garden and enjoy nature.

Don’t get discouraged. Trust your intuition. Use your 3rd eye to observe life. Don’t just see the ordinary – learn to recognize the extraordinary. 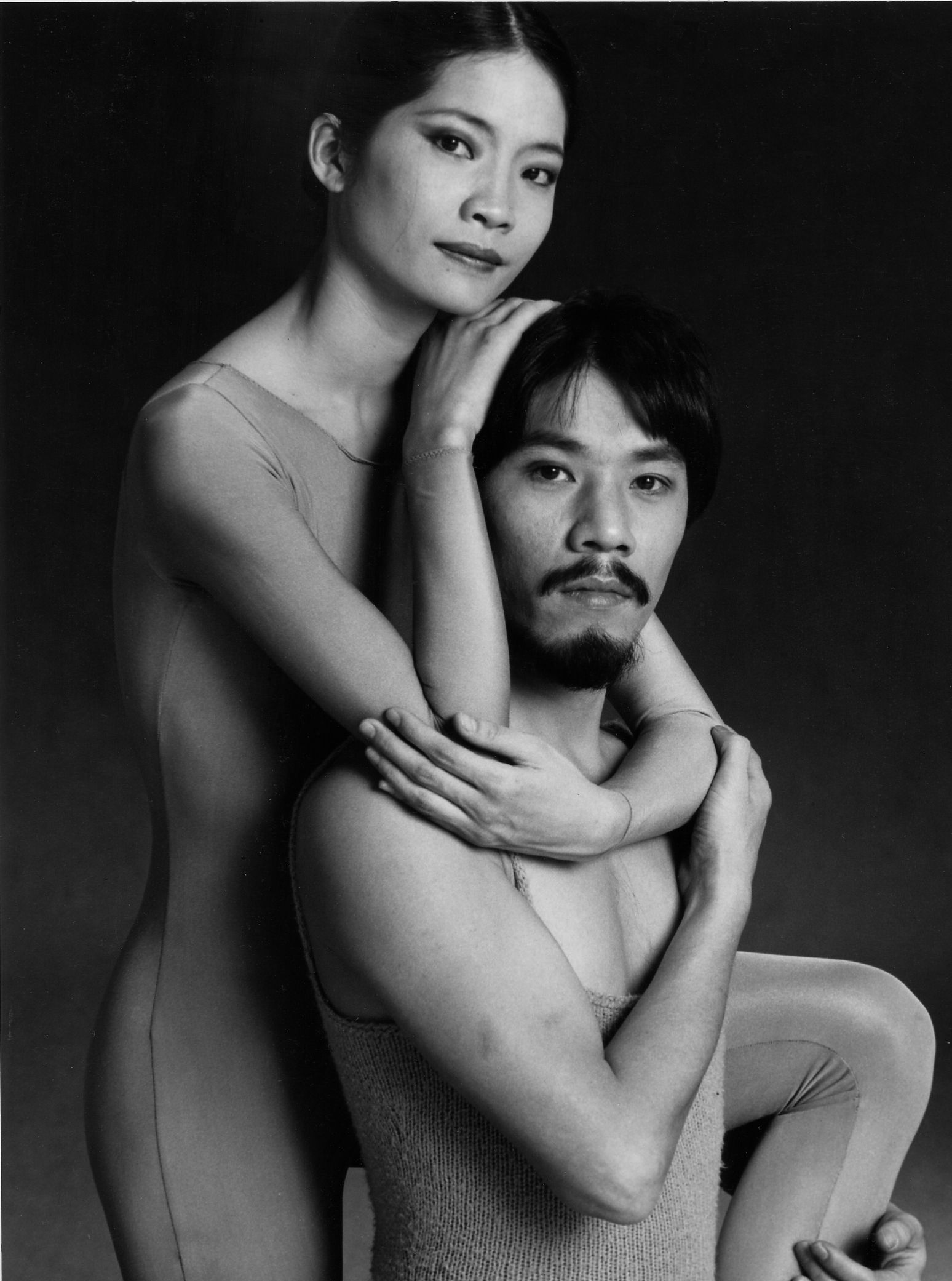 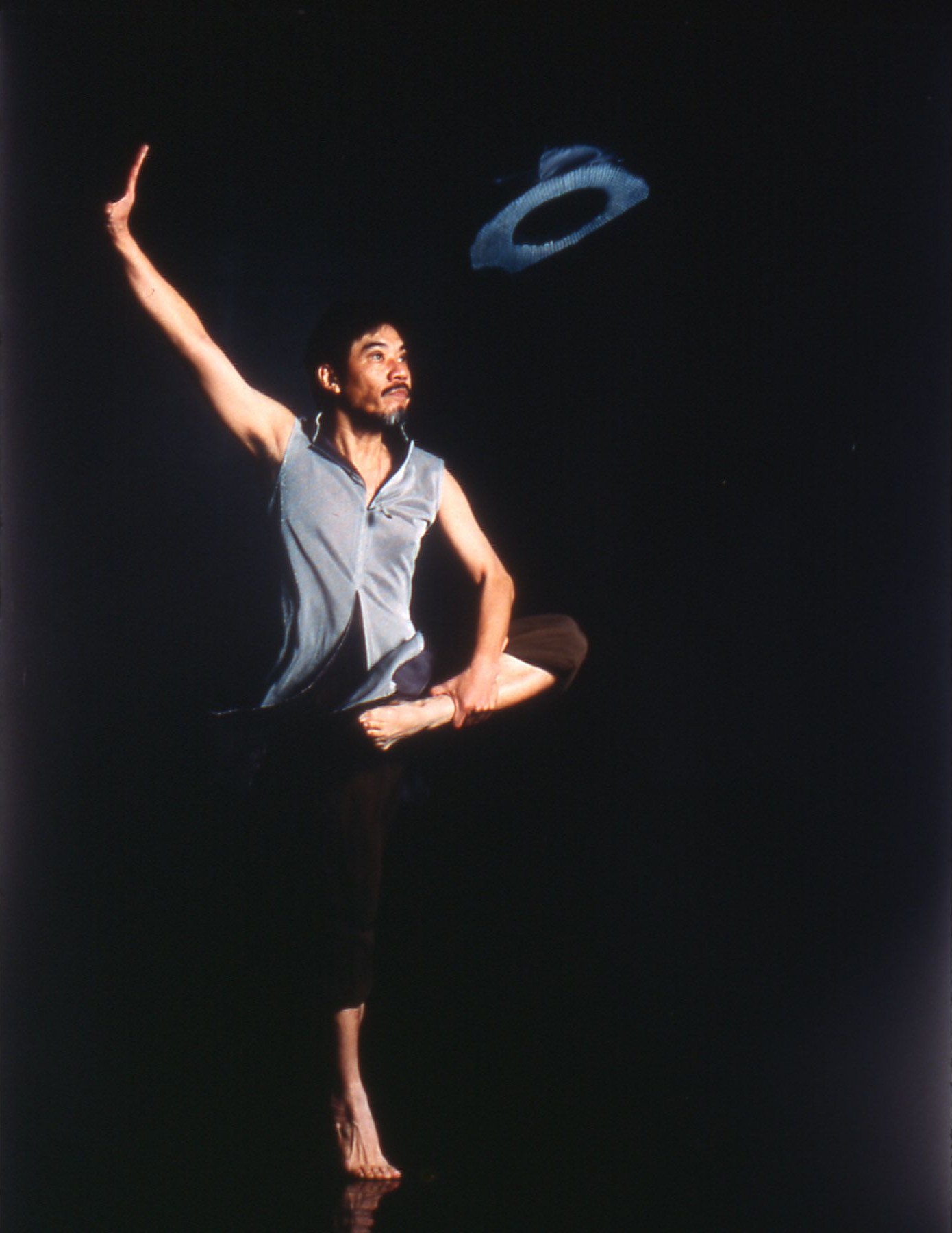 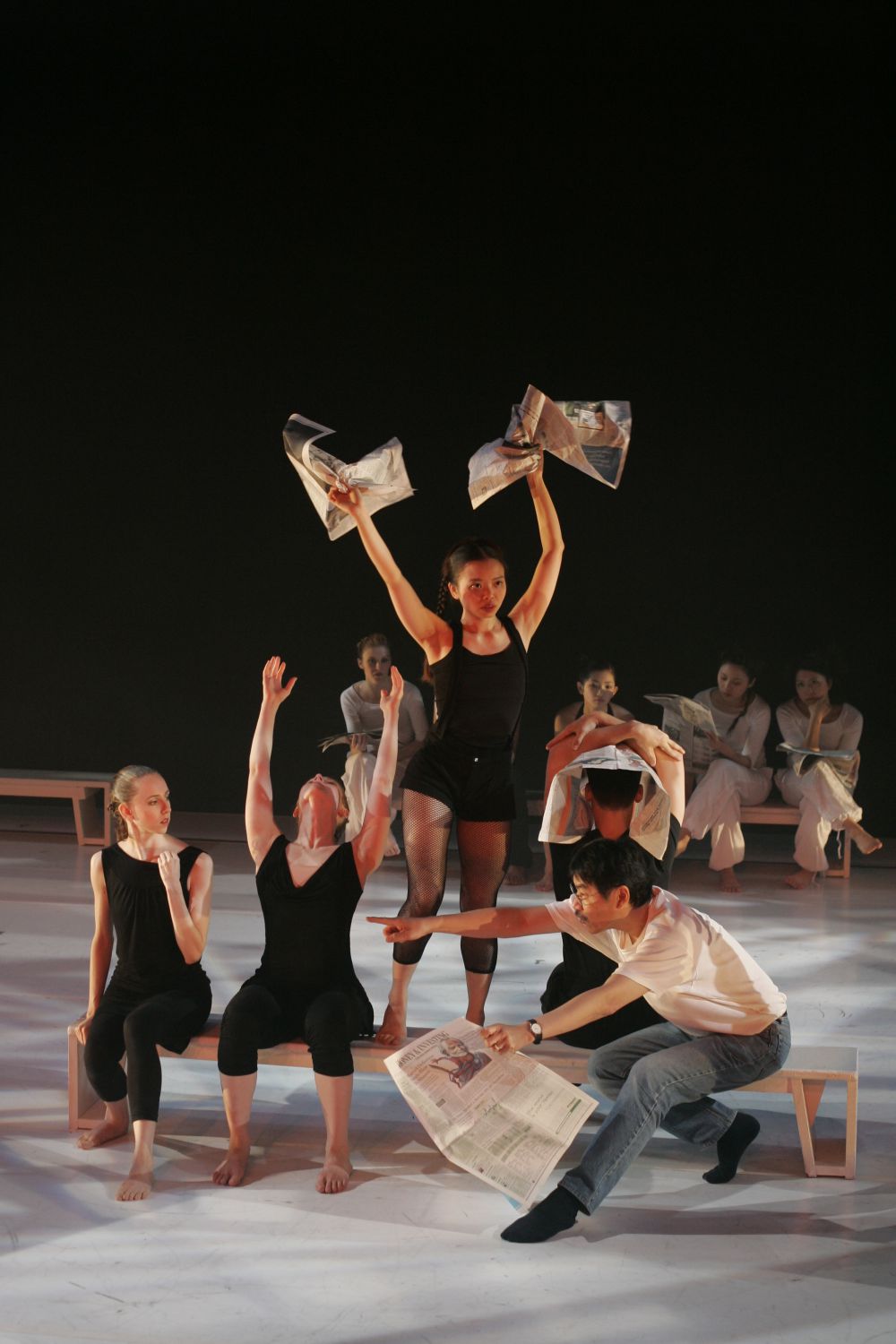 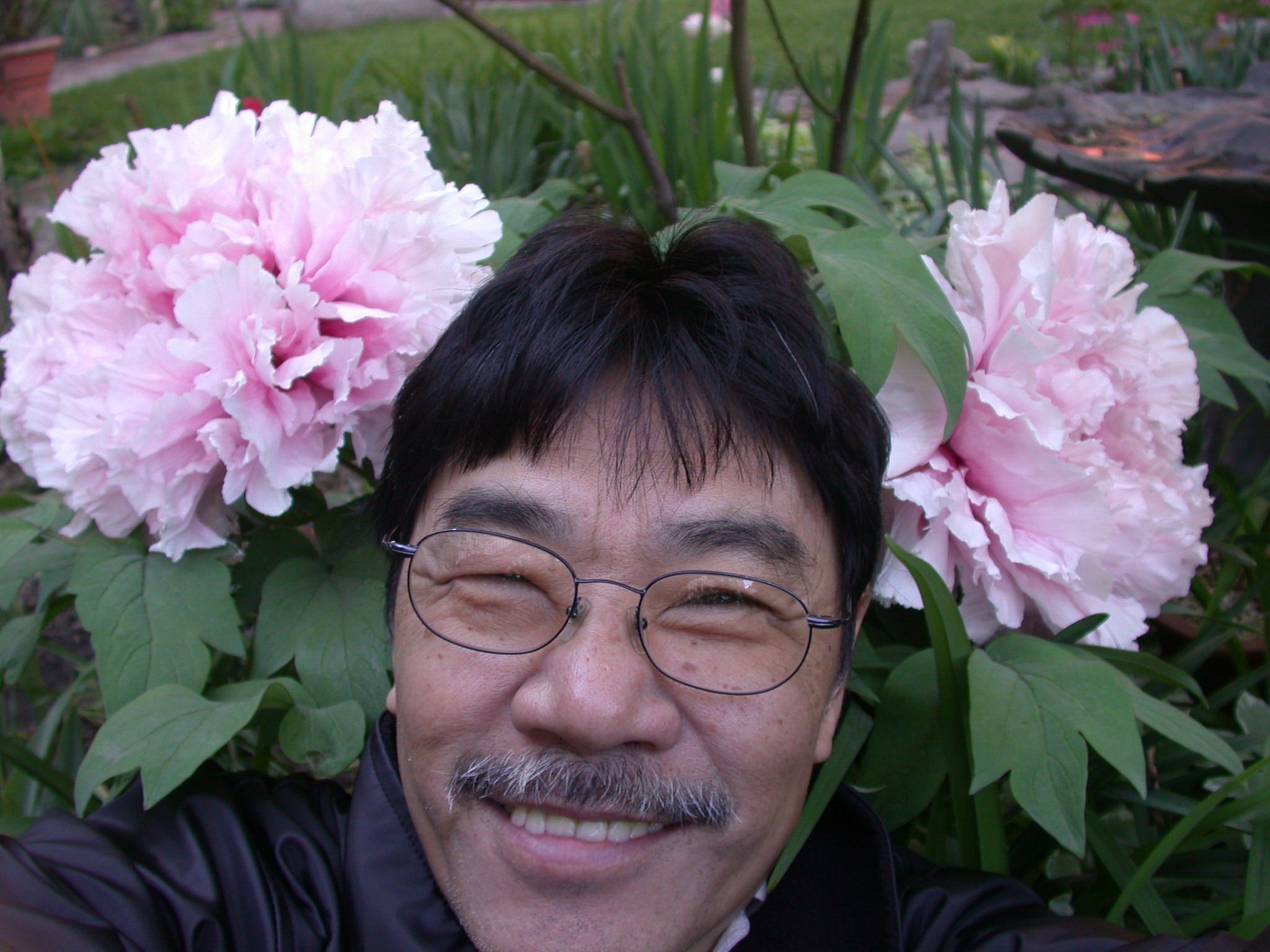 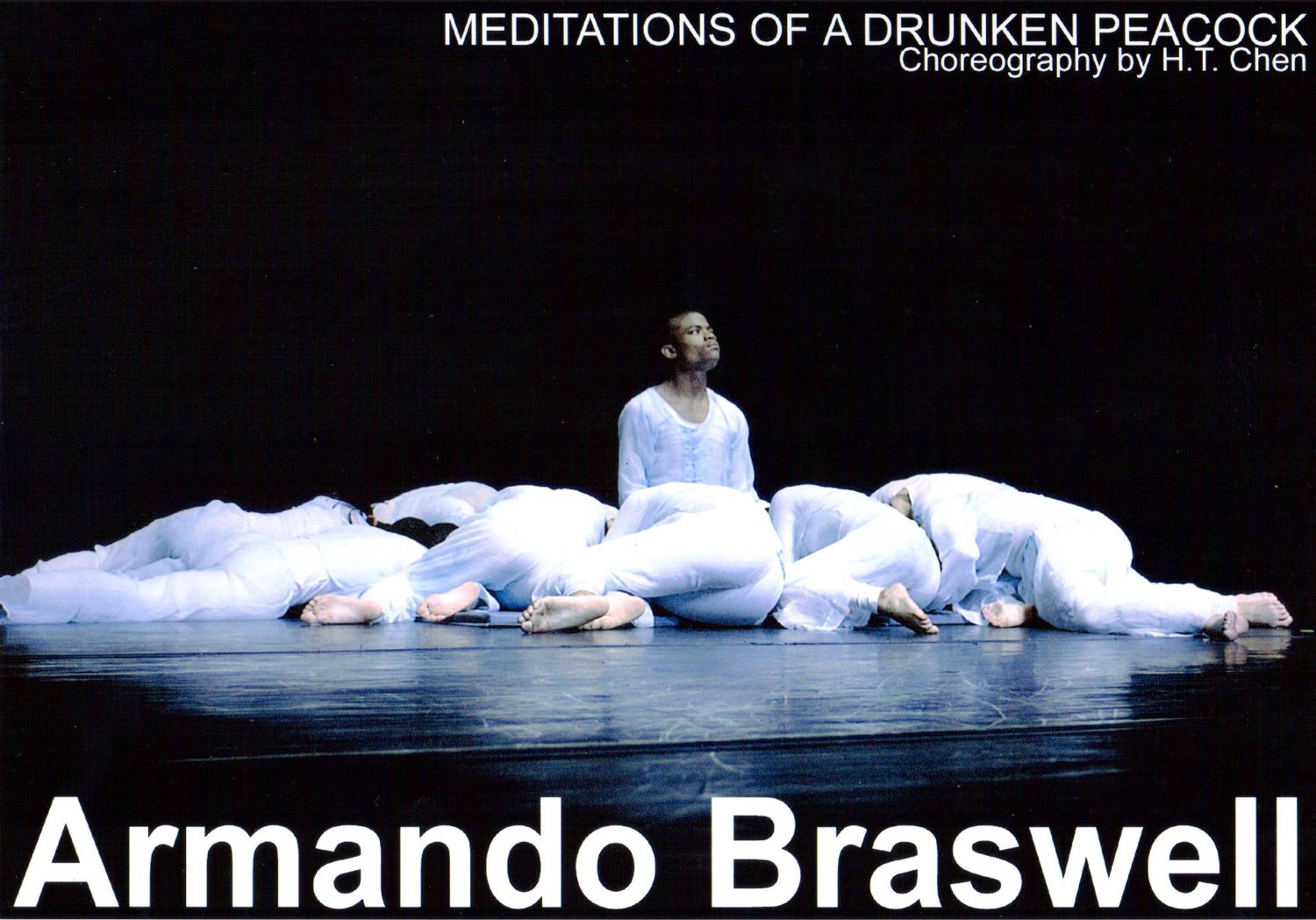 For more information on H.T. Go HERE. Have you worked with H.T.? Help me say thank you by sharing your stories in the comments below. Thank YOU for reading!

Show your support and Join over 950 Interview En L’air subscribers! Thank you!