As Misty Copeland continues to trail-blaze an inspirational path for young black ballerinas, it seems we are slowly finding answers to the daunting question, where are all the black swans? The desperation and urgency for an answer has somehow seemed to mask the true history of the black ballerina narrative. Though few and far between, the black swans were right in front of us all along, waiting patiently to share their stories. Where were they? They were sitting in Studio 3 at The Dance Theatre of Harlem last weekend, gathered together in a tribute celebration called Black Ballerina Magic.  Magical indeed! Beautiful, elegant Dance Theatre of Harlem alumna, pioneers and young artists spanning several generations sat chatting; they were sharing tidbits and relics and celebrating the beautiful black women around them. Among them were some of my personal idols and icons; women who were some of the first African American artists to join major ballet companies and be the true “firsts” to break through the color barriers of ballet. Carmen de Lavallade, Debra Austin, Lauren Anderson, Lorraine Graves, Joan Myers, Stephanie Dabney, Christina Johnson, and Raven Wilkinson were a few in attendance, and as I looked around the room, I was in awe of the jaw-dropping beauty and strength that surrounded me. It was such an honor to be a part of this celebration and to be able to listen to them shed light on an issue that has been plaguing the ballet world for decades. Raven Wilkinson joined the Ballet Russe de Monte Carlo in 1955, and became the first female African American to join a major ballet company. Ms. Wilkinson, though fair in skin and delicate in structure, could only conceal her true race for so long. Touring through the deep South with Ballet Russe in the late 50’s, she was sent in a “colored” taxi to a “colored” motel because she wasn’t allowed to stay in the same vicinity as her fellow dancers. Almost 40 years later, Lauren Anderson became the first female African American ballerina to achieve the rank of principal at Houston Ballet. Ms. Anderson remained the only black female dancer to hold that title in a major ballet company for several years.  Debra Austin, humble and quiet about her own ground-breaking achievements, shared memories of being the first African American ballerina to perform principal roles at the New York City Ballet in the 70’s. She is also perhaps the first ever black female dancer to become a principal, a title she held at Pennsylvania Ballet. As a young student Ms. Austin was told that unless she could achieve soloist status in any company, her career would falter. The reality of that time was that a black woman would disturb the homogenous aesthetic of the corps de ballet. Instead of being discouraged, Ms.Austin was empowered. She used that negativity as fuel, and at age 16 was personally picked by George Balanchine to join one of the most prestigious ballet companies in the world. 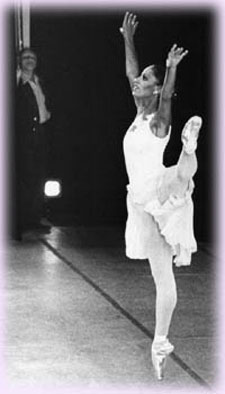 While George Balanchine’s legacy continued on after his passing, his courage did not. While I was training at the School of American Ballet, the feeder school for the New York City Ballet, Aesha Ash was the only black ballerina in the company. When Gia Kourlas mentioned the one African American student in the advanced division at SAB in her 2007 New York Times articles, “Where are all the Black Swans”, that student was me. Courtney Lavine, a friend and beautiful dancer now at ABT, was maybe one or two divisions below me at the time. Both of us bi-racial, we made up that minute percent of black female ballet dancers in the school. When I read Gia’s article, and took a hard look at most of the major ballet companies in the U.S., I knew that it would not be last time this question was thrown at the ballet world. Unfortunately, and I fear like most other young artists of this generation, I had no idea that her article was not the first of its kind. At the Black Ballerina Magic tribute, Dr. Joselli Deans ( a DTH alumna completing her dissertation on the cultural politics of black ballerinas) had a folder overflowing with similar articles dating back as far as the 1950’s. The statistics that she had discovered while researching the topic were truly mind-blowing. In 1997, out of 495 ballet dancers in 10 major U.S. ballet companies, 4.6% were black. In 2001, out of 15 companies, there was only one black female ballerina holding the rank of either principal or soloist, and that was Lauren Anderson. In 2010, out of 846 dancers in major ballet companies, only 26 of them were African Americans. In 2013, out of 908 dancers, 26 of them were black ( 19 men, 7 women) including Misty Copeland. Effectively her results slowly sank in to the faces around the room; we are moving backwards.

As the conversation continued in Studio 3, about how we can try to move forward from the antiquated culture and politics of ballet, I had an epiphany. Though there certainly are less minorities pursuing ballet, they do exist and they can be equally as talented as the “cookie-cutter” stereotype we think of when we imagine a ballerina. It seems that one of the real issues preventing these students of color from success, are the institutions, the artistic directors and the patrons who succumb to the idea that the original vision of ballet is the only vision. The shockingly timid nature of many of the gorgeous ballerinas at the Black Ballerina Magic event is perhaps a reflection of this struggle. The struggle of being told “you have to be better than them to be just as good as them”. The struggle of hearing that they will only be able to make it so far in their careers because of the way they look. The struggle that many of them faced after the Dance Theatre of Harlem folded when they auditioned for other ballet companies and had doors slammed in their faces. Visionaries like Joan Myers Brown, founder of Philadanco and the International Association of Blacks in Dance, are trying desperately to change this. When I first heard about IABD holding an audition solely for black ballerinas, I was almost angered. I thought that her attempt to bring more brown ballerinas into the scene was exactly the sort of exclusiveness that hindered inclusion, and a true idea of diversity. When Joan explained that she was told by many institutions and artistic directors that, “they just didn’t know where or how to find students of color”, I understood why she had to take action. When nearly 100 beautiful ballerinas filled the studio that day, the room swelled with hope.

As the weekend dedicated to the powerful magic of these stunning women came to an end, I was also hopeful. Hopeful and excited about the many new resources and connections I made to being part of a major shift in the world of ballet. These women are at the forefront of something extremely important, making history AGAIN! Many of them are now teachers, artistic directors, professors, choreographers, arts administrators and mentors, helping to inspire and create opportunities for the young dancers of today. Among the many things I learned from them, I now understand that a real solution to the black swan dilemma starts with a conversation. One that is open and honest, but also rich in a history that has been negated and even forgotten….my pointe exactly.

“..Art is not a privilege, it’s a right. I think every kid should not just be exposed to it, but get to experience it. Put it on them. I just want to put it on them.”  Lauren Anderson